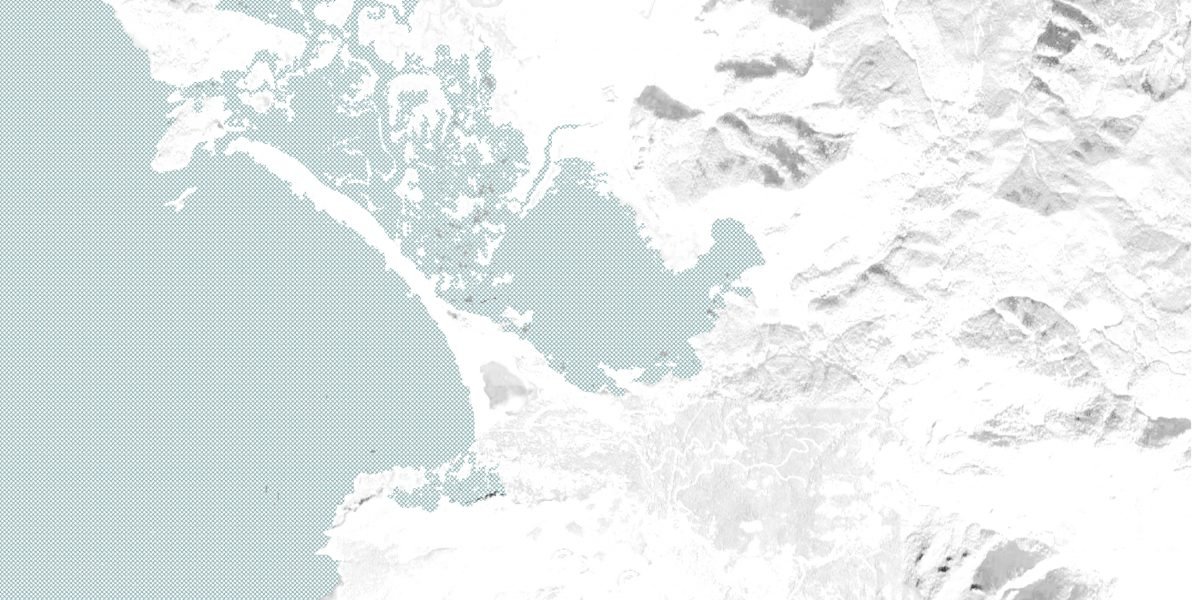 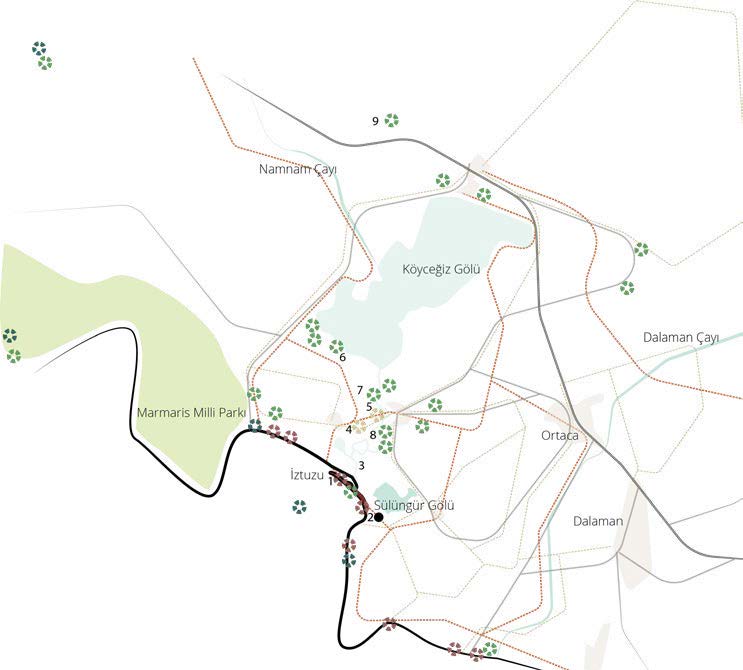 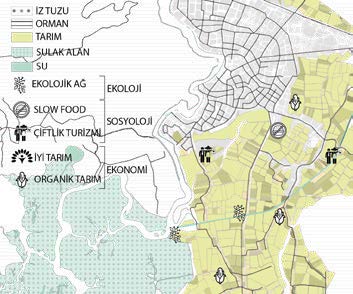 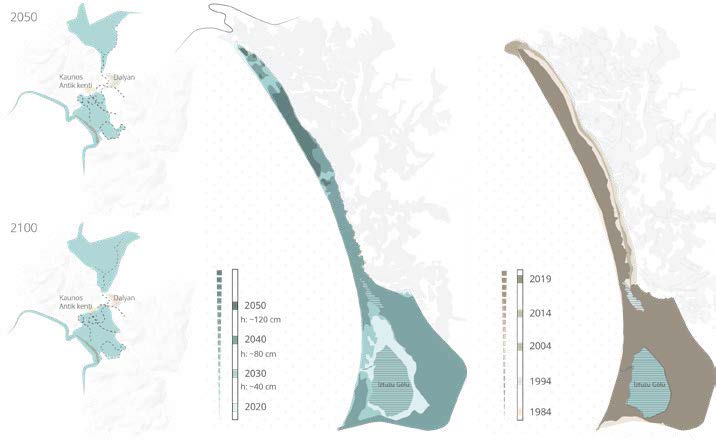 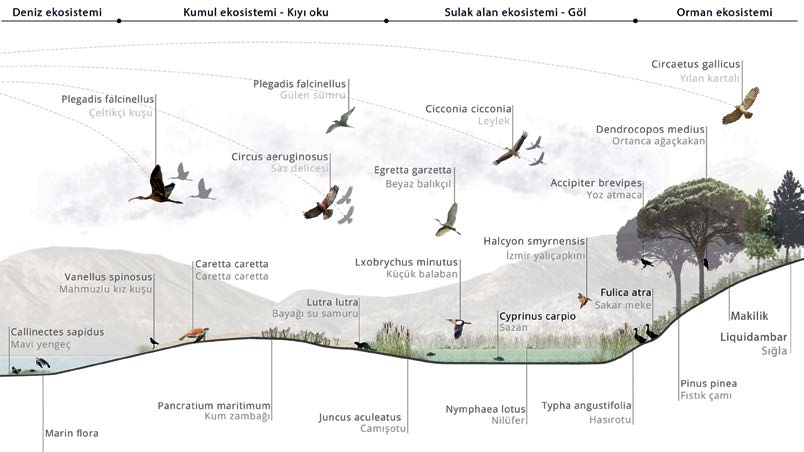 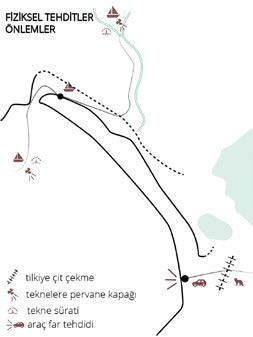 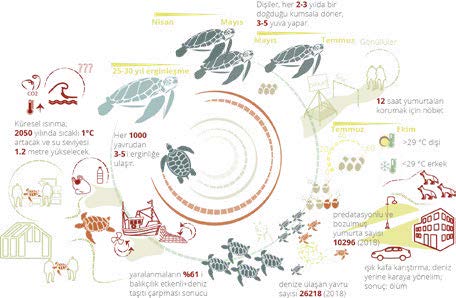 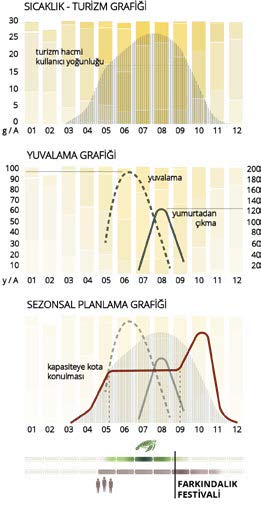 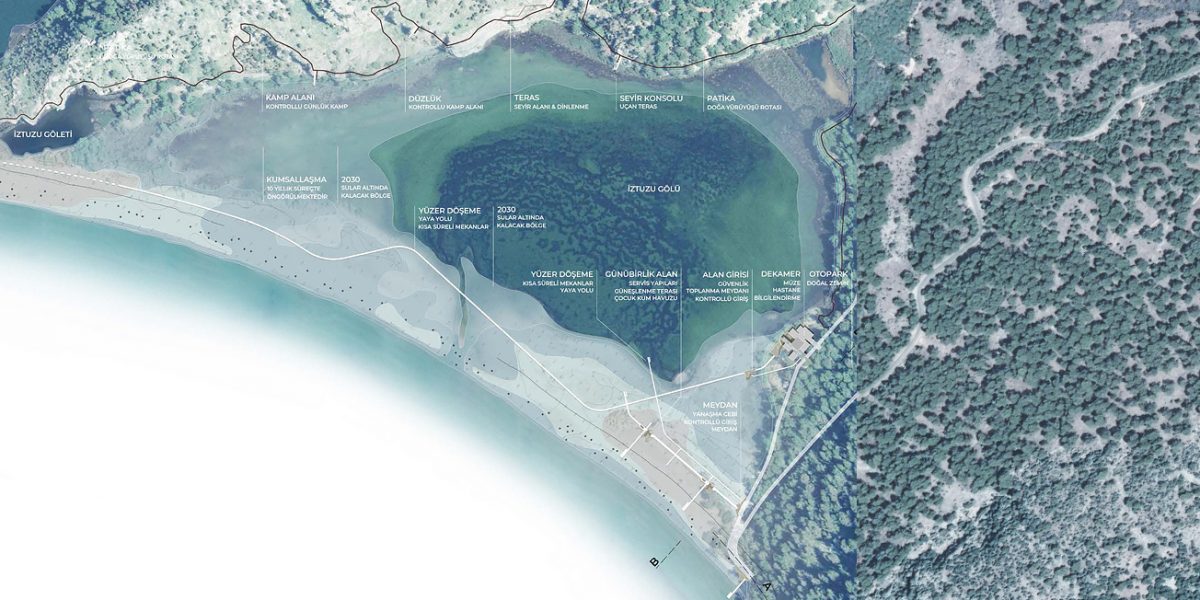 The coast of Iztuzu is one of the rare and sensitive ecosystems hosting the Caretta caretta and many other marines and freshwater fauna along the Mediterranean. The area is rich in terms of both biodiversity and landscape diversity with its saltwater, freshwater, wetland, and forest ecosystems. Because of these features, it is an area that should be planned and designed considering the balance of protection and use. However, the sea level rise is working against the current site ecology. The archeological research shows that the coastline in the 17th century BC passes through the ancient city of Caunos, which is 15 miles north of the current coastal line. Climate and sea-level rise modeling show that coastal line will undergo a tremendous change within a hundred year. That will leave the ancient city of Caunos underwater, which means that the Careta carettas will no longer have habitat to lay their eggs. We investigate the sea level rise in the Iztuzu area for 2050 and 2100 and overlay the findings on the existing topography. Then, we generate the boundaries that would inundate in the upcoming years with 10-year increments hence designing a shifting landscape with dynamic fiction.

Anthropogenic artifacts such as settlements and agriculture accompany the Mediterranean sea, Koycegiz lake, the wetland, the estuary, and the surrounding forest system on the project site for hundreds of years. The agricultural lands, wetlands, waterways, and forests of the site are part of an ecological network. From a socio-economic point of view, agrarian areas have the potential of ‘slow food’ and ‘farm tourism. Regenerative agriculture and organic agriculture could be an alternative to the region’s economy. Besides, Ecotourism, agro-tourism, and nature tourism can play an active role in the economic development of the area as rising trends. Increasing the variety of sustainable and alternative tourism activities in the region will alleviate the burden of existing mass tourism. To ensure tourism diversity and, at the same time, to stay within the carrying capacity during the breeding periods of Caretta caretta species, sound strategies should be developed at multiple scales.

Climate and sea-level rise modeling show that coastal line will undergo a tremendous change within a hundred year. That will leave the ancient city of Caunos underwater, which also means that the Caretta carettas will no longer have habitat to lay their eggs.

The design proposes limiting the number of daily users on the side during the hatching season of Caretta caretta. The design also suggests a festival after the hatching period in September to increase awareness about the Caretta carettas. Each tortoise reaching to the sea will be celebrated with a light, hence the transformation of perception into environmental awareness. By educating the public through play, the coastal landscape will turn into a unique stage for a meaningful protection effort.

Next Project
We use cookies on our website to give you the most relevant experience by remembering your preferences and repeat visits. By clicking “Accept”, you consent to the use of ALL the cookies.
Do not sell my personal information.
Cookie SettingsAccept
Manage consent

This website uses cookies to improve your experience while you navigate through the website. Out of these, the cookies that are categorized as necessary are stored on your browser as they are essential for the working of basic functionalities of the website. We also use third-party cookies that help us analyze and understand how you use this website. These cookies will be stored in your browser only with your consent. You also have the option to opt-out of these cookies. But opting out of some of these cookies may affect your browsing experience.
Necessary Always Enabled
Necessary cookies are absolutely essential for the website to function properly. These cookies ensure basic functionalities and security features of the website, anonymously.
Functional
Functional cookies help to perform certain functionalities like sharing the content of the website on social media platforms, collect feedbacks, and other third-party features.
Performance
Performance cookies are used to understand and analyze the key performance indexes of the website which helps in delivering a better user experience for the visitors.
Analytics
Analytical cookies are used to understand how visitors interact with the website. These cookies help provide information on metrics the number of visitors, bounce rate, traffic source, etc.
Advertisement
Advertisement cookies are used to provide visitors with relevant ads and marketing campaigns. These cookies track visitors across websites and collect information to provide customized ads.
Others
Other uncategorized cookies are those that are being analyzed and have not been classified into a category as yet.
SAVE & ACCEPT
Scroll to Top